The Catcher In The Rye 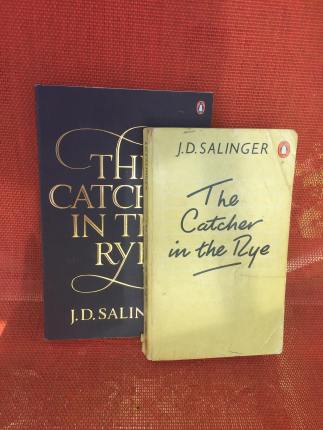 The Catcher In The Rye by JD Salinger is the first ‘adult’ book I ever read, I’d been sticking to books by Sarah Dessen and others like her (not that there is anything wrong with these books, and Dessen’s novel Dreamland remains one of the most touching stories I’ve ever read).

Holden was the rebellious boy who I wanted to be friends with and go on adventures with the first time I read it. I was perhaps a little too young to realise that I shouldn’t have loved the book just simply because of this teenager who was taking charge of his own life, but should have loved the book because of Salinger’s writing style. Of course, now I realise Holden is an unreliable narrator, unable to be critical of himself in the same way he is of the supposedly ‘phony’ people around him, and as a result I view him in a different way to my initial readings.

Salinger’s use of colloquial words invite the reader into the world of a teenager, and help to create the character of Holden outside of a stereotypical angsty teenager. And I’m pretty sure I learnt some of my sarcasm from Holden…

The story itself is entertaining, and perhaps what some teenagers would have done given the freedom – who didn’t think about leaving school at some point Holden’s curiosity about where the ducks go in winter became a joke between me and my sister after neither of us could remember the story of the three billy goats, and neither could anyone else we asked.

The real highlight of the story has to be Holden’s relationship with his little sister and his attachment to his deceased brother. Despite how wonderful the rest of the book is this was something that has remained with me from that very first reading. Despite all of the things Holden could do, he is only really excited to hang out with his little sister. The way he talks to his dead brother is also touching, and through these relationships Salinger demonstrates something that a lot of teenage angst stories don’t – that despite it all, teenagers still love their families and can develop some of the strongest bonds with their siblings, even when they appear to be acting out.

You also might be wondering why I have two copies, it’s not because I am in love with the book (although I am to some extent). The older, yellow covered copy was my dads before he gave it to me (another reason for me to love it, the same reason I wanted to visit Oxford). The newer, blue cover is my own. Whilst at university I was feeling homesick and at the time this was the only book I wanted to read, but I had too many essays due to be able to go home and get it or spend time with my family. So, I bought myself a new copy and made sure I finished my essays early so I could start reading it. It didn’t really cure the homesickness, but it was nice to read the book again.