Find more adventures on the Now Boarding All Rows page.

Adverts for Thorpe Park seem to be everywhere right now, and it’s hardly surprising with their current offer on tickets – pay £49 for a ticket that then gives you access for the entire year. When I went with my sister, Mia, and her boyfriend, Harry, we were easily some of the oldest there, and witnessed countless parents dropping off groups of teenagers. It is a fun day out, but seems mainly aimed at teenagers and twenty year olds. There are rides  for children, but I don’t know if I’d recommend it for a day out unless the kids are able to enjoy the bigger rides. 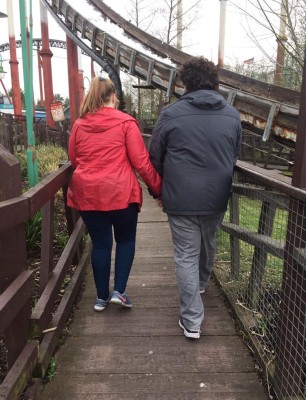 After a short queue for bag searches we were in! We headed straight to Nemesis Inferno, one of the best rollercoasters on offer at the park. We were slightly disappointed with the length of the queue, we had arrived at opening time and ended up waiting about 30 minutes. Although, we realised this was due to the fast track users being allowed straight through to the second part of the outdoor queue. Whilst I understand the perk of purchasing fast passes to reduced waiting times, at other parks I’ve visited and purchased these passes myself I’ve still waited a few minutes at the fast pass section before joining the main queue. However, once in the station I knew it was worth the wait due to my heartbeat echoing in my ears. I’m not normally afraid of rollercoasters, but it’s been about a year since my last visit to a theme park and I always need to get the first ride out of the way before I can truly start to enjoying myself!

Nemesis itself is a relatively short ride that doesn’t make the most of it volcano theming attempt. Although I’m not sure if the theming would actually add to the ride, the half-hearted effort is disappointing. Despite being short it still succeeds in supplying the expected thrill of a rollercoaster, enough to get an adrenaline rush and desire to run to the next big ride – Saw The Ride.

The Saw area has two options, the ride with a near vertical drop that will put off some riders, or the horror maze that me and Mia refused to try and practically ran past, much to Harry’s disappointment. The last time I went to Thorpe Park we went on Saw first, and queued for about 5 minutes. However, having prioritised for Nemesis we were waiting in the caged, outside area that like Nemesis, could have had some more theming. Although I’ve never watched any of the Saw movies I didn’t feel as though I was stepping into the 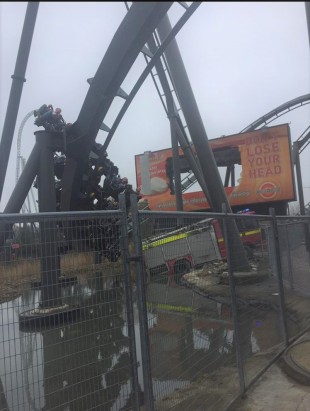 gruesome games it depicts, but then I assume most of that has been saved for the maze. Fans of the films are probably more likely to appreciate the nods to the films with rusting torture instruments strewn about. The ride itself is another good one, it broke the record for the world’s steepest unbraked drop when it was first built. There are blades and other features to ‘enjoy’ whilst on the ride, but I must admit that until the drop was long over I kept my eyes firmly shut.

Stealth was up next, however, I gave this one a miss. After going on it with my friends and being informed, as I pulled down the safety harness, that sometimes it roles backwards, any enjoyment that can be gained from this rocket-like ride has been lost. For those braver than me it is a short, fast ride that provides not only a rush but great views of the park at the top of the track.

We took a break for lunch, heading to KFC which was busy, noisy and not that clean as staff struggled to keep up with the huge amounts of visitors. Whilst there are a number of places to eat at the park they offer the type of fast food you’d expect. Eating wasn’t the most enjoyable experience, but I suppose that’s the problem with a captive customer base. 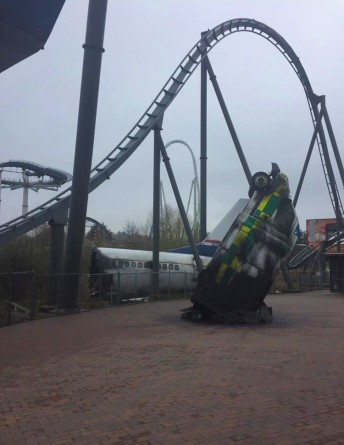 We made our way to Storm in a Teacup, taking a break from the big rides until we had digested. Harry took great delight in spinning our teacup faster than anyone else’s – me and Mia couldn’t stop giggling as we bashed into one another and were reminded of doing the same as small children with our dad as chief spinner.

We were excited to try the new Derren Brown’s Ghost Train ride and the new Walking Dead ride. Whilst I don’t want to spoil either I’d honestly not recommend them, at least not for the 1 hour wait time. We ended up waiting for over an hour both rides and we all came away thoroughly disappointed at these two interactive/live action rides.

The Ghost Train was disappointing because, due to the long queue, you lost any fear – Mia was terrified and had to be dragged to the queue, but after 45 minutes wasn’t even a little apprehensive. The ride itself is interesting due to the use of headsets, however none of us were able to get these to fit comfortably, and throughout the ride I was able to see the floor, ruining the effect.

The Walking Dead ride failed to impress again due to a long queue time and little theme and a lack of actors. I feel they tried to create too much of a ‘story’ for the ride, instead of just packing it full of images from the series and animatronic zombies – personally I feel the guard tower could have been improved with a zombie devouring a guard high above you as you waited. The ride itself is a nice rollercoaster that younger riders could enjoy as long as they aren’t frightened by the theming (or lack of).

We gave colossus a miss as the queue was stated as being 45minutes, and none of us felt like getting headaches from being thrown around. As an older ride most of the thrill is taken away by the discomfort of your head being bashed between the safety harness. Instead we went to Swarm, another brilliant ride that offers thrills, a smooth ride and a respectable level of theming. Swarm and Nemesis are definitely tied for best ride experience at Thorpe Park. 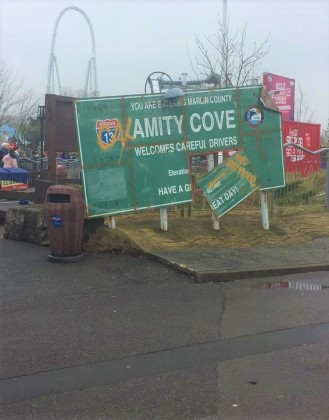 We ended our day by grabbing some fresh donuts (these aren’t massively cheap, so if you do plan a day out remember to add in the additional cost of these little treats) and enjoying the rapids in style. As it was near to closing time we decided to make Tidal Wave our final stop, and as the day hadn’t been that warm it was best left until last instead of paying for the drying booths. Tidal Wave is simple but does what it says – be prepared to be pouring water from your shoes!

After buying some souvenirs, I opted for a Walking Dead cup and an angry birds moveable magnet, we made our way home, happy if a little tired.

Would I recommend Thorpe Park? Yes, but expect to spend a lot more on food and drinks than you’d like. Although, for some great tips on saving money at Thorpe Park take a look at this brilliant post from Kisses of Confidence and be prepared to wait for the best rides and the newer (but not as good) rides. Ultimately it is a good day out, with the usual drawbacks of any busy attraction.